You are here: Gestureworks Core » Visualizer

The Visualizer is a powerful visualization tool for multitouch input and gesture analysis. This standalone utility has been developed using Gestureworks Core and openFrameworks to display rich, real-time data from a variety of input devices. Gestureworks Core actively displays raw input data from multitouch devices as well as calculated cluster data and qualified gesture event output. It does this using a simple, easy-to-use GUI called the Visualizer. 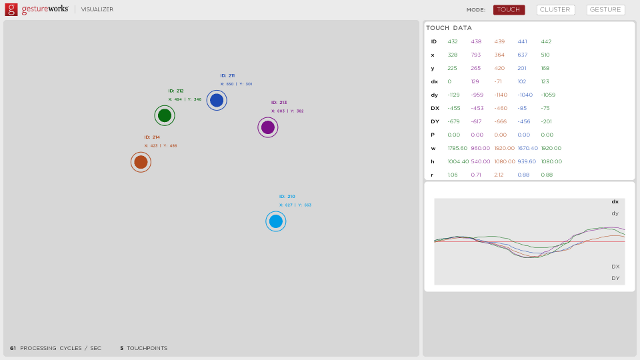 The touch panel shows the raw touch data associated with each touch point.

Tracked touch points are dispayed by a colored circle with a single ring. Next to this circle is associated raw touch data:

The Touch Data block tabulates the data associated with each uniquely tracked touch point. Each touch point has a series of fundamental and calculated properties:

Below this block is a chart which dynamically shows changes in individual point positions (deltas). Displaying deltas in this way clearly shows trends and patterns in touch point motion and can be used to identify discontinuity in touch point tracking or tracking noise.

The cluster panel display calculated cluster information generated from touch point motion. The cluster data is a combination of results from kinemetric and geometric analysis that has been performed on the local cluster.

The chart below the data block shows the changing values (deltas) on a normalized scale. As the touch points move and the cluster properties are recalculated each frame and update the chart. Viewing deltas using the chart can clearly show trends, patterns and turning points in the data and give a clear sense of any noise associated with touch point tracking or delta calculation errors.

The gesture panel has three sub panels or views: 2D, Timeline and Stroke. These views show detailed gesture data structures after they have been processed by the gesture pipeline and collected as gesture events.

The 2D view in the gesture panel shows the gesture event based manipulation of a 2D square. The manipulations consist of affine translation, rotation and scaling which directly result from the DRAG, ROTATE and SCALE gesture events generated from cluster motion. The center of transformation is established from the center of the touch point cluster.
In the feedback block this view also shows a series of charts which display the dynamic output of each selected gesture event. The Gesture ML block displays the GML code segment that describes each selected gesture (associated with the rectangle).

The timeline view in the gesture panel shows raw touch events along with TAP and DOUBLE TAP gesture events. The each raw touch event is placed into a timeline frame when detected. However gesture events are batched so that multi-point TAP events events are grouped and counted as a single event then placed in a single frame which displays the number of touch points involved with the gesture. The timeline frame rate is synchronized to the application touch frame processing rate, which in the visualizer is set to 60fps. (Note: If no touch points are present the timeline will pause).

The Stroke view in the gesture panel displays vector paths directly drawn by touch point motion and matched STROKE gesture events. When a touch point is detected any change in the potion of the touch point will draw a line which represents the path of the touch point. These paths are then checked against paths defined in the GML. When a match is made a STROKE gesture highlights the corresponding graphic in the feedback block. There are four main types of STROKE gesture available in the default GML associated with eh visualizer: Letters, Numbers, Shapes, Symbols and Greek which can be selected in the Gesture feedback block.