This binding has been deprecated - please see the most recent release notes for more information.

Download the code for all of the Python & Kivy multitouch tutorials here: tutorials_python_kivy.zip 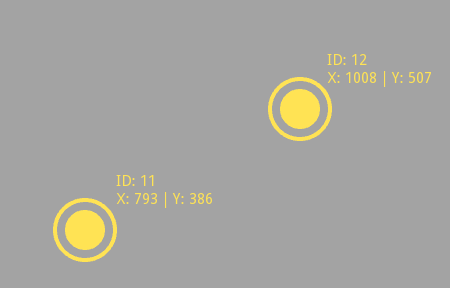 In the first tutorial you were introduced to Gestureworks Core, the concept of “bindings,” and you created an empty gwc_python and Kivy project in Eclipse. This tutorial assumes you have completed the steps found in Python: Getting Started I (Hello World), and that you have a fully configured Eclipse project ready for use. If you have have not yet done so, please follow Python: Getting Started I (Hello World) to prepare an Eclipse project that includes a reference to the gwc_python module before proceeding.

We will need a very basic Kivy Language file for this project. Right click on your project and select New → File. Name the file “miltitouch.kv” and add the following content to it:

First, we will need to create a main file for our project. Add a blank Python module file to your project and call it “main.py”. Your Project should now look something like this:

We'll start by importing the GestureWorksCore class and an enumerated status value for touch points.

Next, let's import everything we’ll need from Kivy:

We will create a class for our application derived from the Kivy App class. For now, we will just create a basic constructor that takes an instance of the GestureWorksCore class we imported. We’ll also need to override the build method.

The constructor just keeps an internal reference to the GestureWorksCore object, sets the window’s background color and initializes an empty dict that we’ll use to store active touch point data. It then calls its parent constructor.

Now that we have a class for our Kivy app, we need to initialize it with a GestureWorksCore instance and get it running. Add the following code to the bottom of your main.py file:

Please be sure to change the path passed to the GestureWorksCore constructor to match the path on your system to the correct DLL.

If GestureWorksCore was able to load the correct DLL, we simply initialize the core with the size of our touch display, instantiate our Kivy app and run it.

We need to add one important line to our MultitouchApp constructor to enable Gestureworks to process frames at a scheduled interval. Just before you call the constructor for the app’s parent, add the following line:

We don’t have a callback method in our MultitouchApp called updateGestureWorks yet so let's create it now.

Here we clear the drawing area and tell Gestureworks to process one frame of data for us. We then consume any point events that occurred during that frame. If there were any, we’ll receive a list of PointEvent objects as defined in the GWCUtils file in the bindings. We then process the events we consumed and draw desired data to the screen. We’ll create the processTouchEvents and drawTouchPoints methods in the following steps.

6. Create A Method To Track and Process Touch Points

This method will also belong to the MultitouchApp class and will take as a parameter the list of touch events we received from our call to consumeTouchEvents:

The method simply iterates over the events in the list and checks their status. If the event does not correspond to the removal of a touch point, we update our entry in our internal dict to reference the updated value. If the event is of type TOUCHREMOVED, we remove that touch point from our dict.

Since Kivy and Gestureworks don’t use the same coordinate system for tracking data, we’ll need to translate the y-coordinate of all of our touch points.

Now we can draw the data on the screen.

First, we draw the touch point as two concentric circles, only filling the inner circle. We do this by drawing an ellipse whose major and minor axes are the same. The position we specify for the ellipse will be the lower left corner of its bounding box so we need to shift it left and up by an amount equal to its radius.

Next we just create a label to display information about the touch point, namely its ID and x and y position. This is drawn above and to the right of the touch point.

8. Register The Touch Window With Gestureworks

There is just one more small but important task we must complete. We need to register our application window by name with Gestureworks. We can do this when Kivy builds our application class. Update the build method to look like this:

In the next tutorial we will introduce GML and gesture events. We will also discuss the concepts of touch objects and the methods we use to associate touch points with them.